Chev Michael Flynn, KCSG, was the Secretary in the Irish Embassy to the Holy See in 1962. The following is his account of this important event.

“In March 1962, as Secretary of the Embassy of Ireland to the Holy See, I had the honour and privilege of being included in the Presidential suite of President Eamon de Valera, Uachtaran na hEireann, on the memorable occasion of his official state visit, accompanied by Sinead Bean de Valera, to His Holiness Pope John XX111 and the Holy See. During the weeks prior to the state visit I assisted Ambassador Leo T McCauley, in the preparation of the official programme for the visit in consultation with the Secretariat of State in the Vatican.

President de Valera, accompanied by Sinead Bean de Valera, Mr Frank Aiken, TD, Minister for External Affairs and other members of the Presidential suite, arrived in Rome on 15 March, 1962. During his visit President de Valera and some members of his suite stayed in the Villa Spada, the embassy of Ireland to the Holy See and residence of the Ambassador on the Janiculum Hill.

On 16 March, the eve of the state visit, His Holiness Pope John XX111 conferred on President de Valera the Supreme Order of Christ. Archbishop Angelo dell Acqa (1903 – 1972) of the Secretariat of State came to the Villa Spada and presented President de Valera with the honour on behalf of the Pontiff. On Mrs de Valera the Pope conferred the Gold Cross Pro Ecclessia et Pontifice and on Frank Aiken the Grand Cross of the Pian Order. I was conferred with a commandership of the Order of St Gregory the Great. Arising from that presentation to me, I was inspired to take an interest in the history of Pontifical Orders of Knighthood.

Major Vivion de Valera was conferred also with a Commandership of St Gregory in the military class.

There was a transparent sense of national pride among members of the Irish community, lay and religious, in Rome arising from the high honours conferred on the President and his wife by Pope John XX111.

I retain a vivid memory, half a century later of the morning of St Patrick’s Day, when President de Valera and his suite departed from the Villa Spada and arrived in St Peter’s Square where they were welcomed on behalf of the Pope with formal Vatican ceremonial. In brilliant sunshine the Swiss Guard and the Chamberlains of the Cape and Sword of the Papal Court led the Procession into the Apostolic Palace. The Cameriere Segreti di Spada e Capa, their Palatine name, were resplendent in their renaissance uniform and their badge of office, a spectacular gold chain. They were laymen who were always present to welcome official visitors at the Apostolic Palace. Their successors since the Papal Court was reorganised in 1969, are known as Gentlemen of His Holiness, but they no longer wear the Renaissance costume. Today they wear the chain of office.

Pope John received the President and his wife in private audience. The President presented a reproduction of St Patrick’s Bell and its shrine, from the originals in the National Museum, to the Pontiff. The gift was in a case of white leather on which the Papal Arms and the Irish emblem were inscribed.

As a member of the Presidential Suite I was conscious of the high esteem in which the President and the people of Ireland were held by Pope John XX111, now St John XX111. At the conclusion of the private audience the Pope entered the adjoining salon where the President presented to the Pope each member of his suite. The Pope expressed a warm welcome to the members of the suite individually, and clearly showed his happiness in receiving them in the Vatican. Monsgr Thomas Ryan (1915 – 1983 and subsequently Bishop of Clonfert) who was a staff member of the Secretariat of State was present throughout.

During the following week, the President and his party visited the Irish College, St Isidore’s Franciscan College, St Patrick’s Augustinian House and Church, San Clemente Dominican House and other houses in Rome where there were Irish priests and students. He was evidently delighted to make these visits. These visits were welcomed and cherished by their communities.

Ambassador Leo McCauley and his wife were gracious hosts at receptions and functions in the Villa Spada, where they welcomed Cardinals and prelates from the Vatican as well as members of Irish religious houses in Rome

The following photographs, courtesy of the UCD-OFM Partnership, were taken during the Presdential visit to the Holy See on 17 and 18 March, 1962. 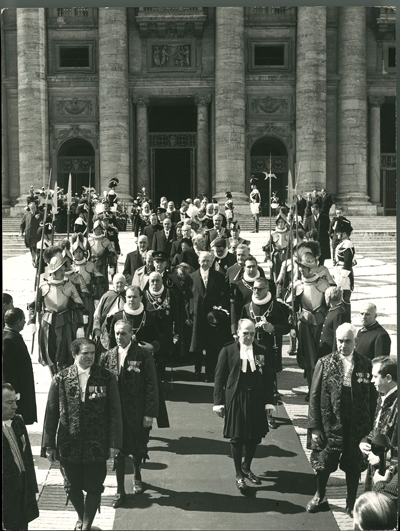 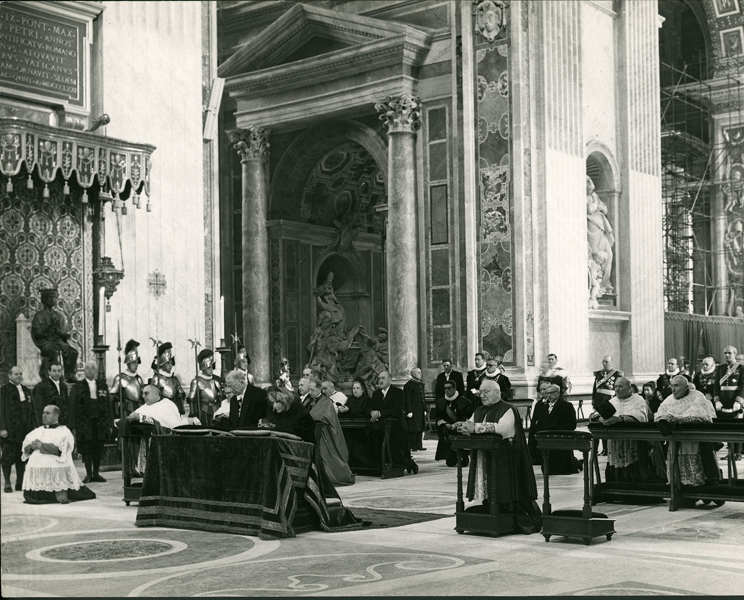 President and Sinead de Valera and members of the suite, kneel in prayer before the High Altar in St Peter's Basilica.